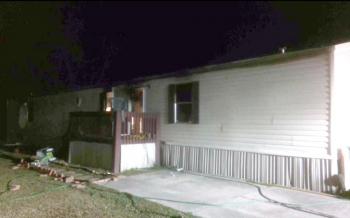 SCENE OF THE CRIME – The mobile home where two women lost their lives in an apparent act of domestic violence Saturday. Two young boys were spared because they had gone to visit their father.
(Louisiana State Fire Marshal)

Investigators with the State Fire Marshal’s Office and the St. Martin Parish Sheriff’s Office continue to piece together the circumstances they say led a Lafayette man to brutally murder an elderly woman and her daughter before torching their home Saturday afternoon.
The victims have been identified as Adeline Etienne, 68, and her 30-year-old daughter, Jamie James.
The suspect, 31-year-old Dereke Ross Siner, described by neighbors as James’ boyfriend, is under arrest in West Feliciana Parish after what authorities describe as a wild flight involving ditching one car in the Vermilion River and flipping another after a high-speed chase.
James’ sons, Jamion, 5, and Caden, 8, escaped the mayhem because they were at their father’s house for the weekend, family members said.
Investigators were summoned to a trailer park in the 1700 block of La. 92, Smede Highway, just after 4 p.m. Saturday, when firefighters discovered the bodies of Etienne and James in the burning residence. The bodies exhibited obvious signs of blunt force trauma, according to the fire marshal’s office. Subsequent reports suggest the women might have also been shot.
Autopsies were scheduled to be conducted Monday morning.
Investigators were able to determine that the fire had been intentionally set after finding evidence of the use of an ignitable liquid believed to have been used to accelerate the development of the fire. Numerous items of evidence were collected on the scene, including a handgun, all of which are being processed at the Louisiana State Police crime lab.
Witnesses reported to investigators that after hearing loud noises coming from the home they went to investigate, at which time they observed smoke and man, later identified as Siner, exiting the home.
According to investigators, Siner left the scene in a vehicle owned by James. Some miles from the scene, Siner abandoned James’ vehicle and fled the parish in a Chevrolet Tahoe.
Lafayette Police said Siner’s getaway vehicle ran into the Vermilion River near the Surrey Street bridge around 3:40 p.m. Saturday. He swam to safety and then allegedly stole the Chevrolet Impala of a passerby who witnessed the crash and stopped to offer assistance.
The Impala was spotted in another parish and officers gave pursuit. Siner was apprehended at about 6 p.m. Saturday in West Feliciana Parish after he crashed while fleeing officers.
At presstime he was being held in the West Feliciana where he was booked as a fugitive from St. Martin Parish. In coming days, investigators are expected to return Siner to St. Martin where he faces charges of first degree murder, aggravated arson, and obstruction of justice.
Members of the victims’ family say the two children, Jamion and Caden, had packed only a small bag to take to their father’s home for the weekend, so all of their clothes and other possessions were lost in the fire.
A GoFundMe page has been set up for the boys. The family said any donations would help, including clothes, toys, etc. They can be dropped off at 1009 Alexander Rd. in St. Martinville or sent to P.O. Box 14251, New Iberia, LA 70562.
The boys’ sizes are: Caden, clothes 10/12, shoes 4; Jamion, clothes 7/8, shoes 1.