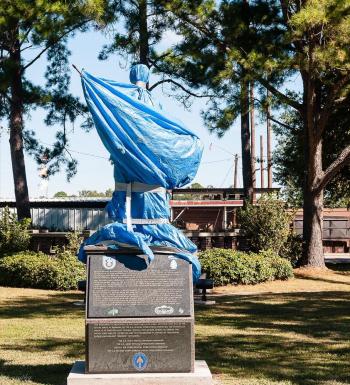 Saturday, Nov. 16, beginning at 10 a.m., a $60,000 bronze sculpture of “Iron Mike” will be dedicated atop the existing Special Operations Monument in Veterans Park.
The ceremony is expected to draw many veterans, including those from the Special Operations community. Breaux Bridge is home to the Louisiana National Guard’s 20th Special Forces Group Company, which was established in 1958, as well as Chapter 81 of the Special Forces Association known also as the “Cajun Warriors.”
A number of local Special Forces servicemen have gained distinction among their ranks for outstanding service to our country.
One such individual commanded the first Special Forces team sent to Southeast Asia in 1954 and earned the title “Father of Thai Special Forces.” Another Breaux Bridge native participated in the aerial support of the Son Tay raid and later commanded all Air Force personnel in the Desert One operation. Yet another won the Best Ranger competition in 2002.
The dedication will be followed by an introduction of VIPs, a keynote speaker, the unveiling of the statue, and a luncheon at nearby Buck and Johnny’s Restaurant including a POW-MIA ceremony.