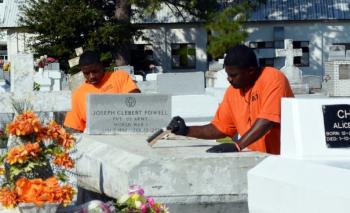 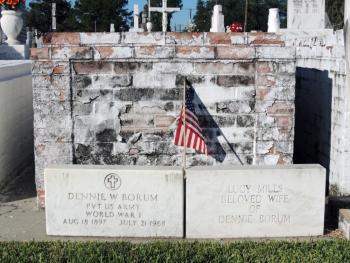 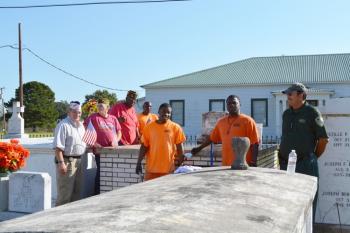 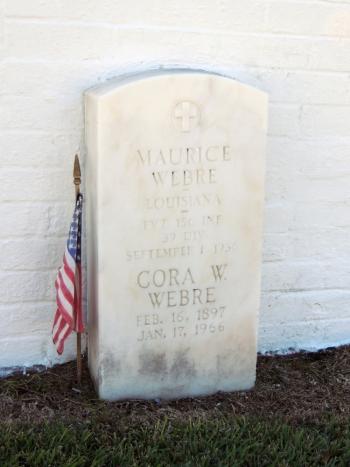 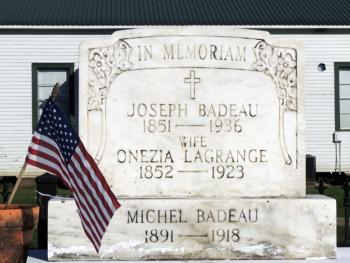 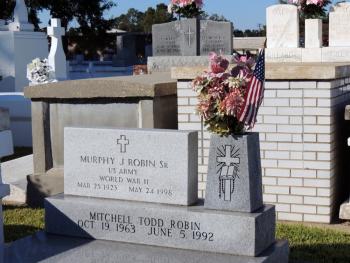 Veterans’ graves get some TLC
ARNAUDVILLE

“We’re honoring the veterans by cleaning their graves,” said Larry Thomas, quartermaster of VFW Post 5153.
Most, he said, are never taken care of.
“Sometimes the fungus, moss, and other grime is so bad you can’t even read the names.” Thomas said. “They deserve better than that.”
Under the direction of post Commander Keith Reed and post member Carrol Knott, a past state commander, and with the help of St. Landry Parish Deputy Sheriff Mike Stelly and his trusty crew, inmates and veterans cleaned headstones at St. Francis Reyis Cemetery in Arnaudville.
To clear the headstone of moss, fungus and other grime, they said they use a solution of algaecide and non-ionic soap approved by the national parks and that will work on any type of stone, granite or marble.
“It’s mild enough so it doesn’t disintegrate any stone,” said Reed.
A little elbow grease and possibly detailed work in the lettering removes all organic buildup. Instead of power washing, which can create further damage to a headstone, they rinse the stone clean of soap with a light spray.
After a few days, the headstone will look brand-new and will not accumulate growth Reed added.
As of the latest count in 2005, there were 249 war veterans buried in St. Francis Reyis Cemetery, which dates back to at least 1840.
“We expect to do another counting in the very near future.” Knott said.
The veteran count includes 15 from the Civil War, 62 from World War I, 128 from World War II , 18 from the Korean War, and seven from Vietnam.
“Quite often those (graves) are the ones who don’t have family left,” Knott said.
“It’s just something we need to do. Someone needs to do it.”