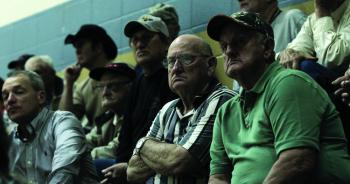 Keeping the Atchafalaya Basin “wet and wild” in face of powerful competing exigencies has been a gargantuan Gordian knot for the more than 40 years since the federal and state governments staked out this goal.
The Mississippi River is dead-set on drying up the Basin with diverted sediment.
Landowners with title to some 443,000 acres and claims on even more as the lakes and bayous silt in were, as one early planner put it, “waiting for the water to recede so they can clean and plant soy sauce.”
While government intervention has stopped the spread of soybean fields in the Basin, hunting leases, logging, and of course oil and gas production tend to spoil or limit the unfettered use of the great river swamp by sportsmen, nature-lovers and commercial fishermen.
The latter groups have joined together as the St. Martin Parish-based Louisiana Crawfish Producers Association - West. Once primarily a marketing and promotion organization (the LCPA - East is now inactive), the group, led by commercial fisherman Mike Bienvenu of Catahoula, has increasingly focused on the “wild” part of the motto, which to them means the legal right to pilot their 20-foot outboard skiffs over the flooded lands that have been their traditional fishing grounds.
It has been an uphill battle, with precious few victories owed to the resilience of the fishermen with legal help from the crusading lawyers of Joseph Joy & Associates of Lafayette and the technical help from the environmentalists of the Sierra Club led by Harold Schoeffler and Haywood “Woody” Martin.
For these multi-generational, real-life “swamp people,” keeping the Basin “wet” means battling:
•The careless methods of oil and gas operators and pipeline companies, whose myriad canals with their attendant spoil banks effectively trap life-giving floodwaters into many stagnant and dead lakes;
•The U.S. Army Corps of Engineers, who regulates the flow of Mississippi water and sediment into the Basin via the Old River Control Structure;
•And to some extent the very saviors the government has put in charge of keeping the Basin wet and wild.
In the early 1970s, Congress put the Corps in charge of regulating dredging and fill in wetlands. And about the same time it mandated the Army engineers partner with government environmentalists and wildlife biologists to reconcile the competing interests of nature and civilization – to untie that Gordian knot.
In “Designing the Bayous: The Control of Water in the Atchafalaya Basin 1800-1995,” Corps historian Martin Reuss says the Corps was an unwilling partner in this wet-and-wild quest from the get-go. Its historic vision of the Atchafalaya Basin has been a 100,000-square-foot center channel eager to carry fully half of a raging Mississippi flood straight to the Gulf, sparing Baton Rouge and New Orleans. Reuss notes that between 1952 and acceptance of its new role, the Corps sealed off 22 life-giving natural distributaries into the swamps in the interest of maintaining that clean, open chute to the sea.
The Atchafalaya Basin Agency Management Group consisted of the Corps, the U.S. Fish and Wildlife Service, the relatively new Environmental Protection Agency, and various state agencies including Wildlife and Fisheries, the Department of Natural Resources, and the Department of Culture, Recreation and Tourism. While the biologists and the conservationists wanted the federal government to buy up the private lands in the Basin, the landowners, acting primarily through the Corps and with considerable political influence from other quarters, came up instead with a system of environmental servitudes or easements in which the landowners were paid not to develop their Basin landholdings.
The servitudes and permits have proven inadequate to prevent landowners from sealing off perched lakes as private duck ponds (which the federal court has disallowed, but only on a case-by-case basis), laying permanent roads for deer hunters (still being litigated), and claiming as private silted-in state-owned lake beds.
In 1996, Corps requested the state to designate a lead agency to deal with the Basin. Gov. Mike Foster picked the Louisiana Department of Natural Resources (DNR), within which was set the Atchafalaya Basin Program (ABP). In its infancy, the ABP directed a lot of federal funding into projects unrelated to the quest to keep the Basin wet and wild. It bought the Opera House for St. Martinville, for instance.
Even when the program became more focused on water quality, the fishermen and environmentalists of LCPA - West were dubious of projects like the Bayou Postillion dredging, shown in court to actually be a barge canal for oil and gas interests.
LCPA - West will hold its annual meeting in the gym of Catahoula Elementary School here Tuesday, March 8, starting at 7 p.m. Non-members are more than cordially invited.
Annual membership is $10 a person, which includes a T-shirt and bumper sticker. “We’re not trying to raise money, we’re trying to increase our membership,” says Bienvenu. “The more members we have, the better to get the attention of the politicians.”
For more information, go to www.lcpa-west.com or Facebook.