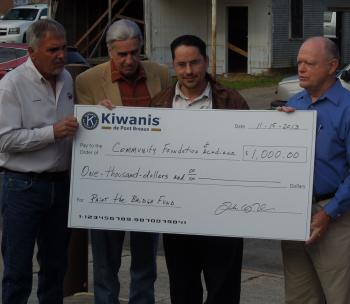 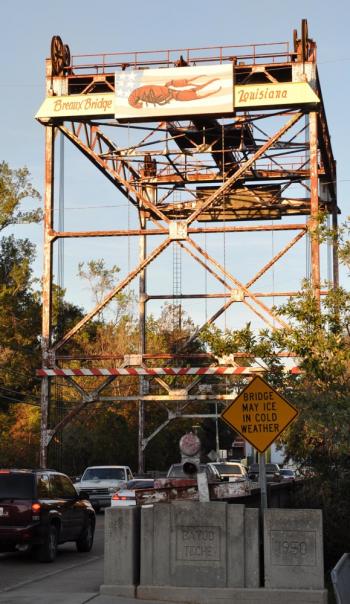 Friday, Nov. 15, got off to a good start for those spearheading and supporting an effort to refurbish the famed drawbridge in downtown Breaux Bridge.

The Kiwanis Club de Pont Breaux presented a $1,000 check to the Community Foundation of America, a non-profit entity located in Lafayette, which will handle all donations and accounting functions, including the payment of invoices.

Mitch Martin, owner of Gator Graphics in Breaux Bridge, also stepped up to the plate with a $250 donation and an offer to direct all profits from the sale of “Paint the Bridge” T-shirts specially made for this fund-raiser.

City Councilman Gary Champagne, chairman of the Paint the Bridge committee, hinted that other substantial donations are in the offing and are expected soon.

The event kicked off a drive to raise private donations to restore and repaint the structure which is badly in need of repair. Champagne said that the project is not only to improve the appearance of the bridge but to address environmental issues due to the exposed lead-based paint which was used originally.

The bridge, which lies in the heart of the downtown area and which has been a source of pride for generations of city residents, narrowly missed a move by the Louisiana Department of Transportation and Development, some years ago, to gut the superstructure, with its pulleys and counterweights, and leave the deck as a fixed-span bridge. In the face of local opposition, DOTD instead refurbished the machinery that lifts the 140-ton span to accommodate traffic on the bayou, a rare instance nowadays.

Long overdue, the painting project will cost between $500,000 and $700,000, much of which will go to the safe “containment” of the lead based paint that will be removed through sandblasting. Some of the funding, it is hoped, will come by way of a grant or grants, pending inclusion on the list of National Historical Bridges of Louisiana. According to city officials, a decision on this is expected as early as February 2013.

Moving forward, the Paint The Bridge group will be planning fund raisers, working with local associations and civic groups.

“Community Foundation of Acadiana appreciates the opportunity to partner with the Breaux Bridge Area Chamber of Commerce for the Bridge Restoration Project,” said Raymond J. Hebert, the foundation’s president. “This absolutely fits with our mission and Breaux Bridge and St. Martin Parish are within our primary service areas. This project presents a unique opportunity for the community to help beautify Breaux Bridge for years to come. We are especially pleased that 100 percent of all donations will directly benefit restoring the bridge as Spherion Staffing Services is graciously sponsoring the project and covering administrative costs.”

Anyone wishing to serve on the Paint the Bridge Committee or otherwise wishes to volunteer their service is urged to call Councilman Champagne at (337) 371-9971.