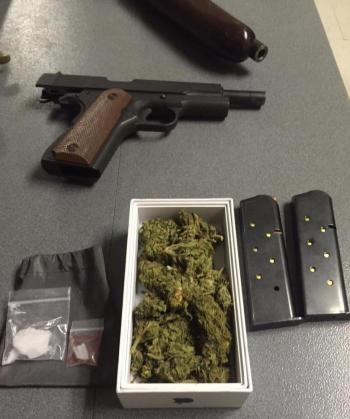 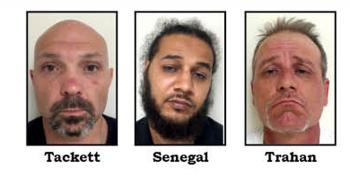 Three St. Martin Parish men were arrested Thursday, June 2, after sheriff’s deputies executing a search warrant found firearms, marijuana, methamphetamine, body armor and alleged stolen property.
The raid by narcotics agents and detectives with the St. Martin Parish Sheriff’s Office occurred at a residence in the 1000 block of Noel Dr. in Henderson.
Lloyd Tackett Jr., 42, of Henderson, and Terrance Senegal, 28, and Timothy Trahan, 44, both of Cecilia, were booked into the St. Martin Parish Correctional Center.
SMSO spokesperson Maj. Ginny Higgins said the search of the home yielded “a significant amount of high grade marijuana and methamphetamine, and several firearms, which included a sawed-off shotgun.”
Investigators also recovered stolen property from the residence, Higgins said.
Tackett was booked on suspicion of possession with the intent to distribute Schedule I (marijuana) and Schedule II (methamphetamine) narcotics, distribution of Schedule II narcotics, possession of drug paraphernalia, illegal possession of stolen things, unlawful use or possession of body armor, illegal carrying of a firearm in the presence of a controlled dangerous weapon, possession of a firearm by a felon, and violation of a drug free zone.
Senegal was booked on suspicion of obstruction of justice, possession of marijuana, and violation of a drug free zone.
Charges on Trahan are possession of methamphetamine and violation of drug free zone.