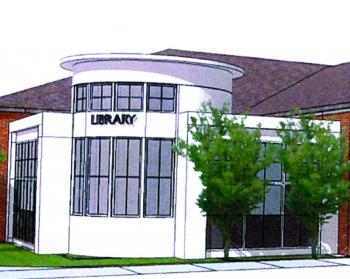 Upon the recommendation of the project architect, Glenn Angelle, the St. Martin Parish Library Board voted unanimously, at last night's meeting (11-4-13), to award the building contract, for  the new public library in Breaux Bridge, to Cangelosi Ward LLC, a well respected contractor in the Baton Rouge area.  Cangelosi, at $3,059,000, was the low bidder out of five, coming approximately $141,000 under the proposed budget of $3,200,000.

The project calls for demolition of the existing library, located at the corner of Courthouse and Main,  roughly tripling its size from 4108 square feet to 12,558.  The new facility will take in a section of the adjacent Agriculture Building and will include additional parking, underground drainage, new sidewalks and site lighting,  underground utility lines as well as the preservation of an on site live oak tree which will be a key architectural focal point.

Other expenditures approved by the board were $7,146 for asbestos abatement which will be performed by Double J Environmental Services and air quality testing, after abatement,  to be done by Breathe Safe Environment, in an amount not to exceed $8,550.  The Board also approved the expenditure of $369,728 for the purchase of furniture, fixtures and equipment from Library Interiors.  Acadiana Movers was chosen to handle the move to the library's temporary location, in the Park Plaza Shopping Center next to Winn Dixie, for a cost of $15,499.

The Library Director's request to close the Breaux Bridge branch from December 2, 2013 through January 1, 2014, to allow time for relocation and becoming operational, was also approved with the Director adding that the Parks branch will offer expanded hours to accommodate inconvenienced Breaux Bridge patrons. The temporary site is scheduled to open January 2, 2014.

Construction of the new facility is expected to begin as early as December of this year with a completion date expected in early 2015.