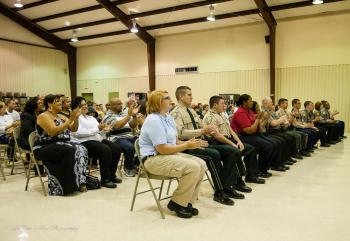 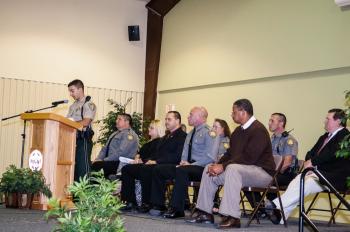 Director of Correctional Services Robley Picard gave the keynote address congratulating students on their successful completion of the course and urging them to build upon the skills learned while attending the Academy. Picard said that their chosen vocation was a calling of the highest order which requires much sacrifice for the betterment of our community. Picard added that their mission will be to protect our homes, schools and businesses and to serve as role models for our youth.

Individual achievement awards were presented to cadets who excelled in various facets of the program. The "Top Gun" award went to St. Landry Parish Sheriff's Deputy Justin Ardoin who, in the firearms training component, scored a perfect average of 120 points. The range for this area of training went from 96 to 120 points. Top honors for the physical training component went to St. Landry Parish Sheriff's Deputy Brady Johnson, who also won the Academic Achievement Award with an average score of 98%. Johnson was also elected class president and he delivered the ceremony's closing remarks.